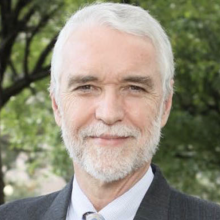 Timothy L. Killeen was named as the 20th president of the University of Illinois in November 2014 following a national search. He assumed office on May 18, 2015.

Beginning in 2012, he served as vice chancellor for research and president of the Research Foundation at the State University of New York, one of the nation’s largest higher education systems with 64 campuses, 465,000 students, 88,000 faculty, and more than 7,600 degree and certificate programs.

As president of SUNY’s Research Foundation, Killeen was head of the nation’s largest, most comprehensive university-connected research foundation, administering about $900 million annually across SUNY’s 29 state-supported research campuses. In his dual role as vice chancellor for research, he was at the center of SUNY’s strategy for research growth and works with campus leaders to increase basic, clinical and translational research.

Before joining SUNY, he served for four years as assistant director for the geosciences at the National Science Foundation. He also has served as Lyall Research Professor at the University of Colorado, as director and senior scientist for the National Center for Atmospheric Research, and spent more than 20 years as a faculty member and researcher at the University of Michigan, where he also served as associate vice president for research.

A leading researcher in geophysics and space sciences, Killeen received his bachelor’s degree and Ph.D. at University College London, where he earned his doctoral degree in atomic and molecular physics at the age of 23. He is a U.S. citizen and a native of Wales.

His research has earned three achievement awards from the National Aeronautics and Space Administration, and he has received awards for teaching and research excellence from the University of Michigan College of Engineering. He has authored more than 150 publications in peer-reviewed journals, along with more than 300 other publications and papers.