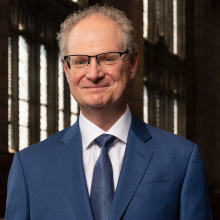 A celebrated chemist and accomplished administrator, Paul Alivisatos became the 14th president of the University of Chicago on September 1, 2021.

As President of the University, Alivisatos serves as Chair of the Board of Governors of Argonne National Laboratory and Chair of the Board of Directors of Fermi Research Alliance LLC, the operator of Fermi National Accelerator Laboratory. He is also the John D. MacArthur Distinguished Service Professor in the Department of Chemistry, the Pritzker School of Molecular Engineering, and the College.

Alivisatos previously served as the Executive Vice Chancellor and Provost (EVCP) of the University of California, Berkeley. In addition to his role as EVCP, Alivisatos was the Samsung Distinguished Professor of Nanoscience and Nanotechnology, founding Director of the Kavli Energy Nanoscience Institute, and from 2009-2016 served as Director of the Lawrence Berkeley National Laboratory (Berkeley Lab). A member of Berkeley’s faculty from 1988-2021, he held professorships in the departments of chemistry and materials science, and served in several administrative roles, including Vice Chancellor for Research.

A preeminent scientist and entrepreneur, Alivisatos has made pioneering research breakthroughs in nanomaterials. Contributions to the fundamental physical chemistry of nanocrystals are the hallmarks of his scientific career. His research accomplishments include studies of the scaling laws governing the optical, electrical, structural, and thermodynamic properties of nanocrystals. He developed methods to synthesize size and shape-controlled nanocrystals, and developed methods for preparing branched, hollow, nested, and segmented nanocrystals. In his research, he has demonstrated key applications of nanocrystals in biological imaging and renewable energy. His inventions are widely used in biomedicine and QLED TV displays, and his scientific advances have yielded more than 50 patents.

Alivisatos received his Bachelor's degree in chemistry in 1981 from the University of Chicago and his Ph.D. in chemistry from Berkeley in 1986. He is a founder of two prominent nanotechnology companies, Nanosys and Quantum Dot Corp, now a part of Thermo Fisher. He is also the founding editor of Nano Letters, a publication of the American Chemical Society, and formerly served on the senior editorial board of Science magazine, a publication of the American Association for the Advancement of Science.