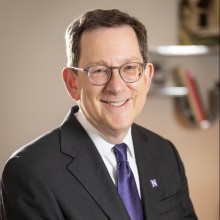 Michael H. Schill took office as Northwestern’s 17th president on September 12, 2022. He also serves as a professor in the Northwestern Pritzker School of Law.

He previously spent seven years as president of the University of Oregon, where he raised the university’s profile in teaching, research, innovation, student access and diversity.

President Schill is a nationally recognized expert in property, real estate and housing law and policy, and is the author or co-author of three books and over 40 scholarly articles. His casebook, “Property,” co-authored with James Krier and Greg Alexander, is among the most widely adopted casebooks in American law schools.

He has served on several nonprofit boards and civic bodies, including Argonne National Laboratory, ITHAKA, the Chicago Innovation Exchange, and the Housing Preservation Compact of Chicago.

President Schill graduated in 1980 with an AB in Public Policy from Princeton University and a JD from the Yale Law School.