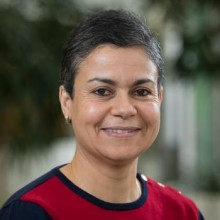 Kawtar Hafidi is Associate Laboratory Director for Physical Sciences and Engineering. She oversees the laboratory’s research programs in physics and high energy physics, materials science, chemical science and engineering, and nanoscience and technology.

She previously served as the director of Argonne’s Physics Division, where she established Argonne as an isotope producer lab and established the Argonne Trace Radioisotope Analysis Center (TRACER), a new, permanent home for the nation’s only laser-based krypton atom-counting machine.

From 2013 to 2014, she was detailed to DOE’s Office of Nuclear Physics, where she demonstrated her ability to forge strong relationships within the U.S. physics community while managing a suite of major projects devoted to achieving America’s scientific missions in physics.

Kawtar has 17 years of experience in leading and conducting fundamental research at major accelerator facilities in the United States and Europe. She is the author of more than 140 publications and has given more than 40 invited talks at international conferences, universities and laboratories.