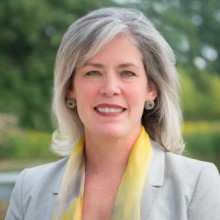 Julie Nuter is Chief Human Resources Officer and Senior Director of Argonne National Laboratory’s Human Resource Services Directorate. HRS oversees the laboratory’s talent strategy, seeking to attract and retain the people the lab needs to excel; sustain a diverse and inclusive culture that helps the lab succeed and thrive; and inspire the next generation of scientists and engineers through educational programs.

Nuter came to Argonne in 2016. She previously served as vice president for human resources at Iowa State University, home to the U.S. Department of Energy’s Ames Laboratory. Nuter joined Iowa State in December 2013 as associate vice president and was promoted to vice president in 2015. She has also served as treasurer and president of the College and University Work-Life-Family Association.

Prior to her tenure at Iowa State, Nuter was associate vice president and director of the human resources organization at DePaul University in Chicago. She holds a Ph.D. in Organization Development from Benedictine University.