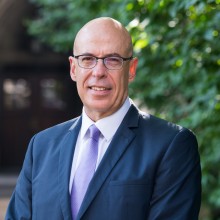 As the Vice President for National Laboratories, Science Strategy, Innovation, and Global Initiatives, Juan de Pablo provides leadership for the University's stewardship of two U.S. Department of Energy National Laboratories -- Argonne and Fermilab -- as institutions to advance science and technology in support of the nation's interest. de Pablo collaborates with other leaders in research and innovation to build programs and links between and among the national laboratories and the University, as well as the Marine Biological Laboratory. Working with President Robert J. Zimmer, he plays an essential role in the University's partnership with the Department of Energy.

A prominent materials scientist, de Pablo's research focuses on polymers, biological macromolecules, and liquid crystals, a diverse class of materials widely used in many fields of engineering. He is also a leader in developing molecular models and computer simulations of complex processes over wide ranges of length and time scales. He heads a research group that develops advanced algorithms to design and predict the structure and properties of complex fluids and solids at a molecular level.

As a key leader for IME, de Pablo's work has been essential to the Institute's development and remarkable growth. He joined the University in 2012 as a member of the first set of IME faculty appointments. He came from the University of Wisconsin, Madison, where he served as the Howard Curler Distinguished Professor and Hilldale Professor of Chemical Engineering. He was awarded the 2018 Polymer Physics Prize by the American Physical Society.

de Pablo is the author or coauthor of approximately 500 publications, and a textbook on Molecular Engineering Thermodynamics. He holds more than 20 patents on multiple technologies, including nine jointly with Paul Nealey, the Brady W. Dougan Professor at IME. The International Technology Roadmap for Semiconductors has identified one of de Pablo and Nealey's collaborative inventions for directed self- assembly as a technology critical to the semiconductor industry's miniaturization goals. Another of de Pablo's patents has been licensed by a major health and nutritional products company and is used throughout the world to stabilize proteins and cells, including probiotics, in glassy materials over extended periods of time without refrigeration.

de Pablo received the Polymer Physics Prize from the American Physical Society in 2018, the DuPont Medal for Excellence in Nutrition and Health Sciences in 2016, the Intel Patterning Science Award in 2015, and the Charles Stine Award from the American Institute of Chemical Engineers in 2011. He served as chair of the Mathematical and Physical Sciences Advisory Committee of the National Science Foundation, and the Committee on Condensed Matter and Materials Research at the National Research Council. He is the founding editor of Molecular Systems Design and Engineering, and co-director of the new Center for Hierarchical Materials Design.

de Pablo earned a bachelor's degree in chemical engineering from Universidad Nacional Autonoma de Mexico, as well as a Ph.D. in chemical engineering from the University of California, Berkeley. He conducted postdoctoral research at the Swiss Federal Institute of Technology in Zurich, Switzerland. de Pablo was inducted into the National Academy of Engineering in 2016 for "design of macromolecular products and processes via scientific computation." He is a fellow of the American Academy of Arts and Sciences, the American Physical Society, and is a foreign correspondent member of the Mexican Academy of Sciences.