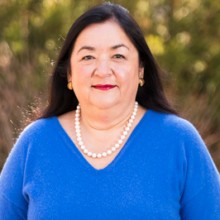 Jane L. Delgado, Ph.D., is President and Chief Executive Officer of the National Alliance for Hispanic Health (the Alliance). The mission of the Alliance is the best health outcomes for all. Alliance community-based members serve over 15 million Hispanics and national members provide services to over 100 million individuals annually. The Alliance is at the forefront of insuring quality in health, science based solutions, promoting cultural proficiency, and linking health and the environment. In 2017 Latino Leaders named Dr. Delgado to the 101 Most Influential Latinos in the U.S., in 2015 she received the FDA Commissioner’s Special Citation the Dr. Harvey Wiley Award (highest award to a civilian), in 2010 Ladies Home Journal named her one of the “Ladies We Love,” and in 2008 WebMD recognized her as one of four Health Heroes for her dedication and resilience. In 2009, the Alliance was recognized by Univision with the Corazón award as the Organization of the Year.

Dr. Delgado is a highly respected and sought after thought leader and commentator. Innovation and action have marked Dr. Delgado’s career as a leader who is transforming health, she is seen on CNN, Univision, and Telemundo. Her writing has appeared in The Wall Street Journal, The New York Times, The Washington Post, El Mundo (Spain) and many other publications. A practicing clinical psychologist, Dr. Delgado launched her book series the Buena Salud® Guides in 2011. The series includes for “…a Healthy Heart,” “…Living with Diabetes,” “Overcoming Depression and Enjoying Life,” “…Arthritis and Your Life” (English & Spanish editions, HarperCollins, 2012), and “…Losing Weight and Keeping It Off” (Buena Salud Press, 2017). Previous books include the critically acclaimed “Salud— The Latina Guide to Total Health “(HarperCollins 1997, 2002), “The Latina Guide to Health: Consejos and Caring Answers” (English & Spanish editions, Newmarket Press, 2010). “Salud— The Latina Guide to Total Health,” “The Latina Guide to Health: Consejos and Caring Answers”, and “The Buena Salud Guide for a Healthy Heart,” were chosen by the Library Journal as one of the best health books for the year they were published.

Dr. Delgado serves on the Board of Health Care Services for The National Academies of Sciences, Engineering, and Medicine and the Board of Governors for Argonne National Labs. She also serves on the Board of the Lovelace Respiratory Research Institute (Vice Chair, Chair Nominating); Keystone Policy Center; and, the U.S. Soccer Foundation. She was appointed by DHHS Secretary Sebelius to serve on the National Biodefense Science Board and was appointed by the Senate majority leader to serve on the Mickey Leland National Urban Air Toxics Research Center (NUATRC) authorized by Congress. Dr. Delgado serves on the national advisory councils for Mrs. Rosalyn Carter's Task Force on Mental Health. She is a member of BankInter’s Future Trends Forum in Madrid, Spain and served on the boards of publicly traded companies (Adams Respiratory Therapeutics, Inc. and Vestar, Inc) until they were acquired.

Previously Dr. Delgado served in the Immediate Office of the Secretary of the U.S. Department of Health and Human Services (DHHS). Working under then DHHS Secretary Margaret Heckler, she was a key force in the development of the landmark “Report of the Secretary’s Task Force on Black and Minority Health.” Prior to working for DHHS she held a variety of positions including Children’s Talent Coordinator for Sesame Street.