Chairman of the Board of Directors, DESY 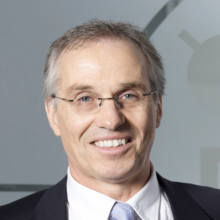 Since March 2, 2009, Helmut Dosch has served as Chairman of the Board of Directors for the Deutsches Elektronen-Synchrotron (DESY), and is the first solid-state physicists in this role.

Prior to his current position at DESY, Dr. Dosch was the Director of the Max Plank Institute for Metals and Research and the Chair for the Experimental Solid State Physics at Stuttgart University. He has conducted research at the Institute of Laue-Langevin (Grenoble), Cornell University (New York) and at the universities of Mainz and Wuppertal. His pioneering work is internationally known in the field of phase transitions on surfaces, through the surface melting of ice and critical phenomena to alloy interfaces. He has also counseled the DESY Directorate as a member of the DESY Scientific Council. As a member of the German Council of Science and Humanities, he evaluated the TESLA/XFEL project which later developed into the European X-ray laser project XFEL and the International Linear Collider ILC. Currently he is Vice-Chair of the Administrative Council of the European Synchrotron Radiation Facility ESRF in Grenoble.

Dr. Dosch is a member of several national and international advisory committees, reviewed journals, and research organizations, and has received several awards, including the X-Plaque der Stadt Remscheid and an honorary doctorate from the Kurchatov Institute in Moscow. He earned his doctorate in 1984 from the University of Munich with his work on the Institute of Laue-Langevin's high flux reactor.