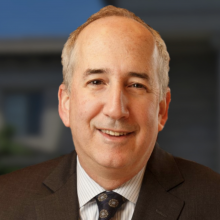 Dr. Eric D. Isaacs begins his tenure as the 11th president of the Carnegie Institution on July 2, 2018.  Isaacs joins Carnegie from the University of Chicago where he has been the Robert A. Millikan Distinguished Service Professor, Department of Physics and the James Franck Institute Executive Vice President for Research, Innovation and National Laboratories.

As Executive Vice President for Research, Innovation and National Laboratories, Isaacs supervised sponsored research and research proposal development across the University of Chicago. He also oversaw entrepreneurship programs and technology transfer, research safety, research computing, several research institutes and three national laboratories on behalf of the university. Isaacs served as CEO of UChicago Argonne, LLC, Vice-Chairman of the Board of Governors for Argonne National Laboratory and is a member of the boards for Fermi National Accelerator Laboratory and the Marine Biological Laboratory.  He represented the university as a founding member of the Giant Magellan Telescope Organization—of which Carnegie is a founding member​.

Isaacs’ research interests are in condensed matter physics and quantum materials. He has a Ph.D. in physics from MIT and a bachelor’s degree from Beloit College. From 2014 to 2016, he served as provost at the University of Chicago. Prior to that he was director of Argonne National Laboratories for five years, where he had been since 2003.

When Isaacs joined Argonne in 2003 he was the founding Director of the Center for Nanoscale Materials, with joint appointments in the University’s Department of Physics, the James Franck Institute and the College.  Previously, he worked for 15 years at Bell Laboratories. including serving as director of the Semiconductor Physics Research and Materials Physics Research Departments. At Bell Laboratories, Isaacs developed synchrotron-based X-ray-scattering techniques, including inelastic X-ray scattering and X-ray microscopy that continue to play an important role in materials and nanoscale scientific research. Isaacs has published more than 120 scholarly publications.

​As president of Carnegie, Isaacs oversees the research and business functions across six research sites on the East and West Coasts. Carnegie is a private, nonprofit organization headquartered in Washington, D.C. Since its founding in 1902, Carnegie has been a pioneering force in basic scientific research. Carnegie scientists are leaders in plant biology, developmental biology, astronomy, materials science, global ecology, and Earth and planetary science.