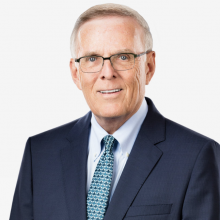 U.S. Senator Byron L. Dorgan served as a Congressman and Senator for North Dakota for 30 years before retiring from the U.S. Senate in 2011.

While in the Senate, he was the principal author of the transmission title of the Energy Bill passed by the Senate Energy Committee in 2009 and has worked extensively on transmission issues. He was the lead sponsor of the Electric Vehicle Deployment Act in the U.S. Senate. He was the principal author of the first renewable fuel standard passed by the Congress and a lead sponsor on the U.S. Senate on hydrogen/fuel cell research. He was a leading supporter of carbon capture technology for coal. As member and later Chairman of the Energy and Water Appropriations Subcommittee, he worked extensively on nuclear issues.

He is a recognized leader in the fields of energy policy, economic issues, aviation policy, Indian issues, trade policy, health care and more. He is considered a compelling public speaker and one of the best debaters in the U.S. Senate.

Senator Dorgan is now active in his post Senate life teaching, speaking, consulting, writing, serving on boards and much more.

Senator Dorgan is a Visiting Professor at two universities lecturing on energy, economic policy and political affairs. He works part time as a Senior Policy Advisor with the Washington DC law firm Arent Fox. He is also affiliated with the Bipartisan Policy Center, a Washington DC think tank, working on energy issues. And he is Chairing a new program at the Aspen Institute — the Center for Native American Youth — focusing on challenges faced by Native American children with an emphasis on teen suicide prevention.

The Senator is the author of two books. The first, a New York Times Bestseller book Take this Job and Ship It, and a second book released in 2009, Reckless... How Debt, Deregulation and Dark Money Nearly Bankrupted America (And How We Can Fix It). And he has a contract to write two more books with the first due to be published in March 2012.