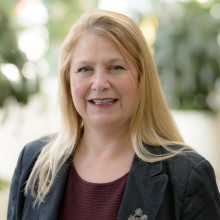 As Associate Vice President for National Laboratories, Quinn serves as Secretary to the Argonne National Laboratory Board of Governors and the Fermi Research Alliance Board of Directors and has executive management responsibility for all Board support and programmatic and operational review functions for both Boards.

Quinn joins the office from Abbott Laboratories, where she served as a business development strategist focusing on securing new business opportunities since 2008. From 1998 to 2008 Quinn worked at the Boeing Company in a series of increasingly responsible positions. As director of Company Administration she staffed the Boeing Board of Directors and the Boeing Executive Council, which included the CEO and the presidents of Boeing's global business units. She then served as director of Shared Services for Boeing's World Headquarters and Boeing International before being named senior director of International Services & Business Support. In this position Quinn reported dually to both unit presidents and supervised a team of 125 personnel in over 25 international offices.

Quinn received a BA in Psychology and English from Vassar College (with honors), a JD from the University of Southern California Law Center, and an MBA from Northwestern University's Kellogg School of Management. She is a member of the State Bar of California. Prior to joining Boeing, she practiced general civil litigation in California with an emphasis on state and federal employment law.