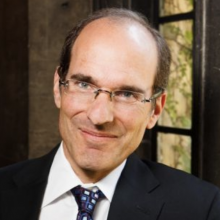 David Nirenberg is Executive Vice Provost and the Deborah R. and Edgar D. Jannotta Distinguished Service Professor of Medieval History and Social Thought. He holds an academic appointment in the College and five academic appointments across the Social Sciences and Humanities Divisions: in the John U. Nef Committee on Social Thought, Department of History, Department of Romance Languages and Literatures, Center for Middle Eastern Studies, and Center for Jewish Studies.

A prolific scholar, he has focused his research on the ways in which Jewish, Christian, and Islamic societies have interacted with and thought about each other. He is the author of a number of books, including Communities of Violence: Persecution of Minorities in the Middle Ages (1996), Judaism and Christian Art: Aesthetic Anxieties from the Catacombs to Colonialism (2011), Race and Blood in the Iberian World (2012), Anti-Judaism: The Western Tradition (2013), and Neighboring Faiths: Christianity, Islam, and Judaism in the Middle Ages and Today (2014). Nirenberg is currently collaborating on a book exploring the relative claims of different forms of knowledge, in the hope of discovering new ways of understanding both the powers and the limits of the sciences and the humanities. He has written extensively on other subjects including love, set theory, poetry, painting, and politics. He has authored numerous peer-reviewed publications, serves on many editorial boards and advisory panels, and is a regular contributor to publications such as The Nation, The New Republic, and the London Review of Books.

Nirenberg earned his bachelor's degree from Yale University in 1986 and his doctorate in history from Princeton University in 1992. He joined the University of Chicago faculty in 2006. He previously served on the faculties of Rice University and Johns Hopkins University and has developed a significant international presence as a scholar. He has held visiting professorships at the Ecole des Hautes Etudes en Sciences Sociales in Paris, the Consejo Superior de Investigaciones Cientificas in Madrid, and the Wissenschaftskolleg zu Berlin, and is an Associate of Germany's Max Planck Society for the Advancement of Science.